Johnny has always had a love for performing and being in front of the camera since a young child. Beginning with acting in commercials and performing on stage, Johnny has continued to build his film resume through regional and national film and TV work. As a teenager, he landed a supporting role in PAX TV’s Sullivan Sisters and was a finalist on the Fast Track to Fame, a talent-competition reality TV show sponsored by the NASCAR auto racing sanctioning and operating company. His most notable television credit is the recurring role of the villain/bad boy Lewis Brightman III in the Amazon Prime dramatic series Proper Manors.

Johnny has starred in a number of independent films, including the title character in the sci-fi thriller Orange, Tim in Make Me Laugh, Matt in Shifted Dreams, and Graham in One Way Single.He made an appearance as Karl Mattis in the web series Places, and the Wilkinsons’ Boy, Oh, Boy music video, along with numerous commercial credits.

Man who loves you

For Johnny's lead performance as Clyde Barrow in the regional premiere of Bonnie & Clyde, he received the BroadwayWorld Regional Best Musical Actor Award. Other favorite roles have include Romeo in Terrence Mann’s Romeo & Juliet the Rock Musical, an original adaptation of Shakespeare’s iconic show, at The Lost Colony; CB in Dog Sees God at Silver Summit Theatre Company; Josh in Afterglow, Steve in Grace, and Cliff Bradshaw in Cabaret at Utah Rep; Mozart in Amadeus at the Florida School of the Arts; and the lead role of Joseph in Joseph and the Amazing Technicolor Dreamcoat, in hundreds of different performances.
Click a photo to read reviews of each show. 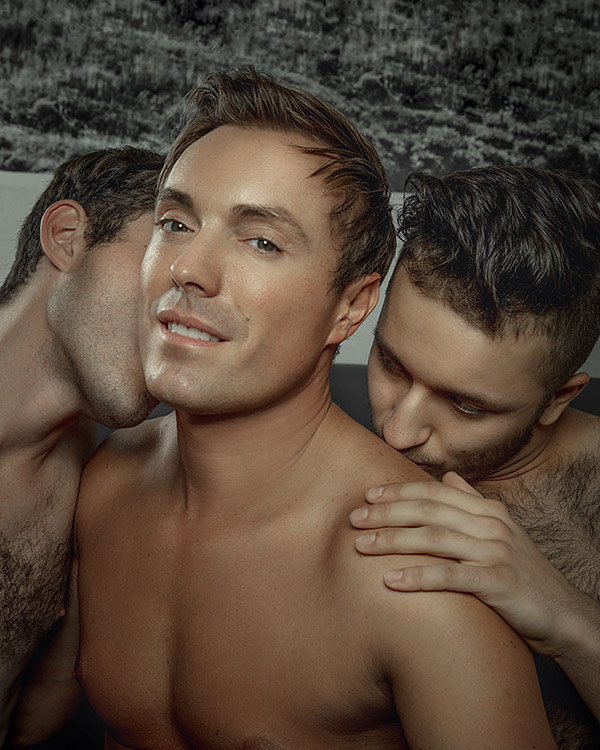 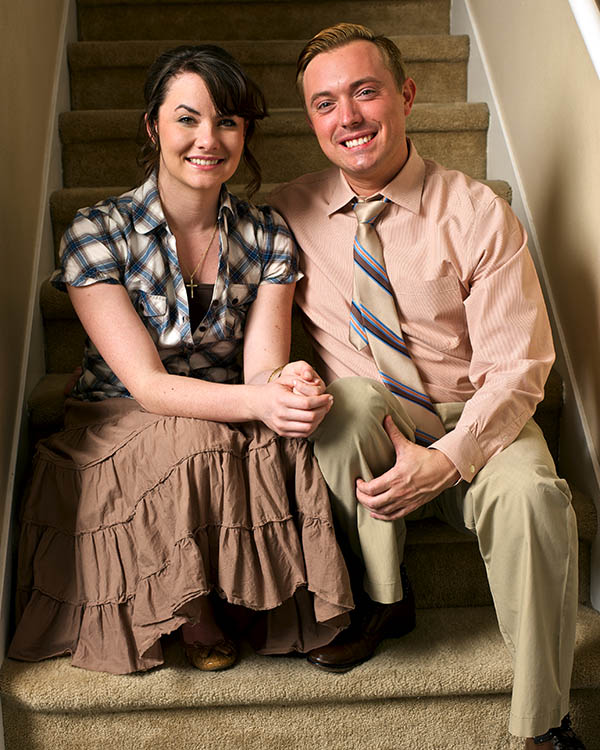 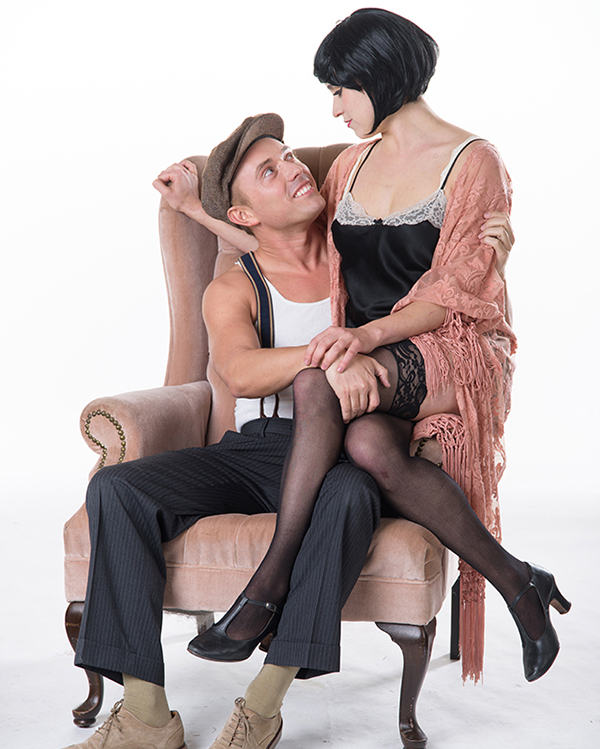 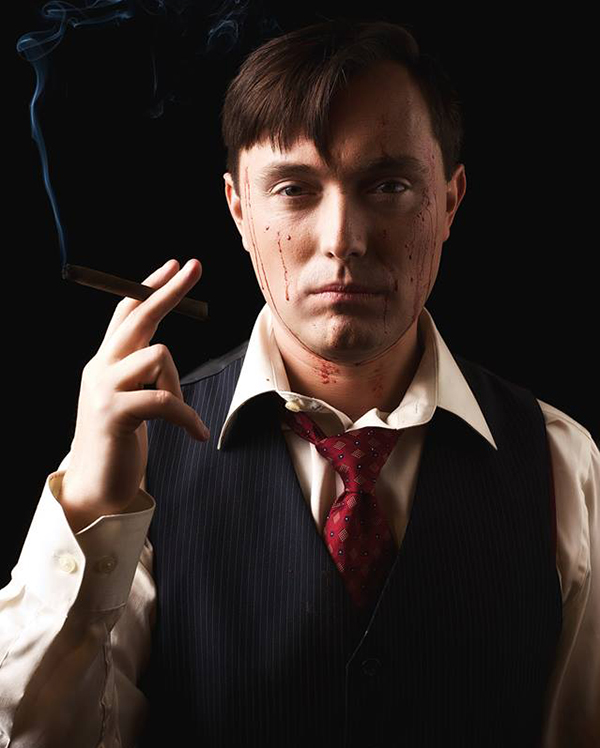 Clyde in Bonnie and Clyde 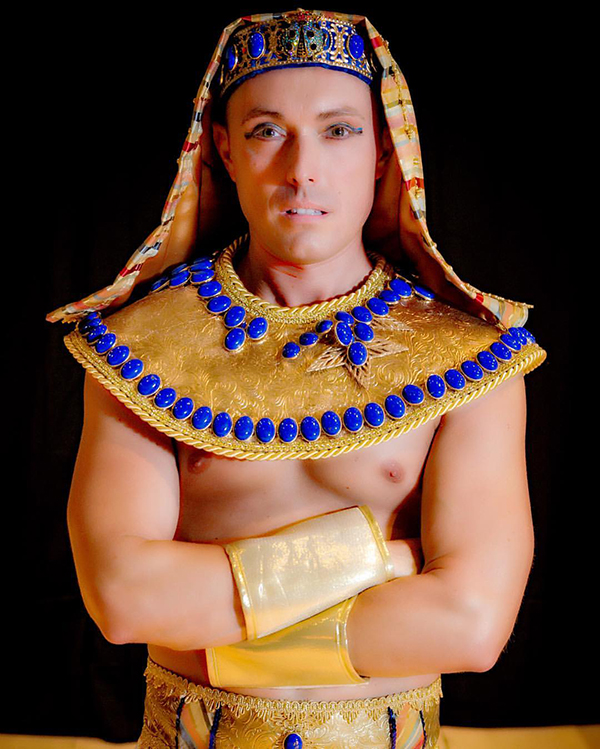 Joseph in Joseph and the Amazing Technicolor Dreamcoat 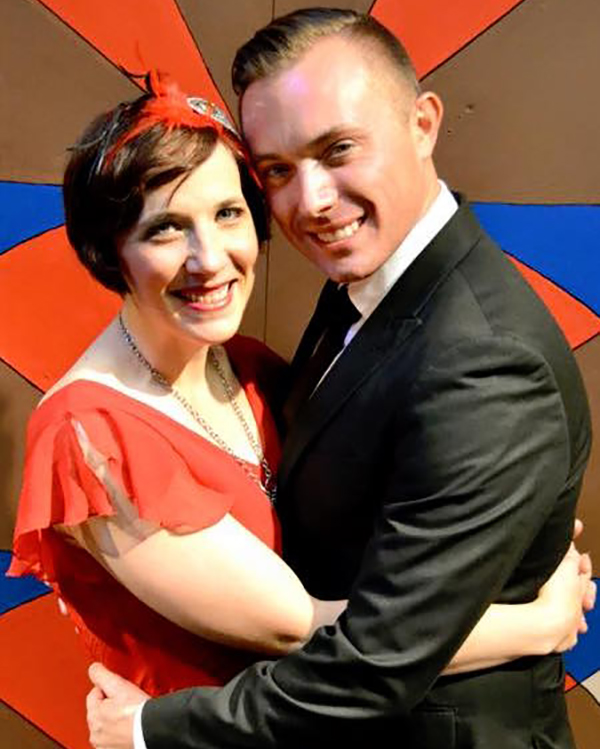 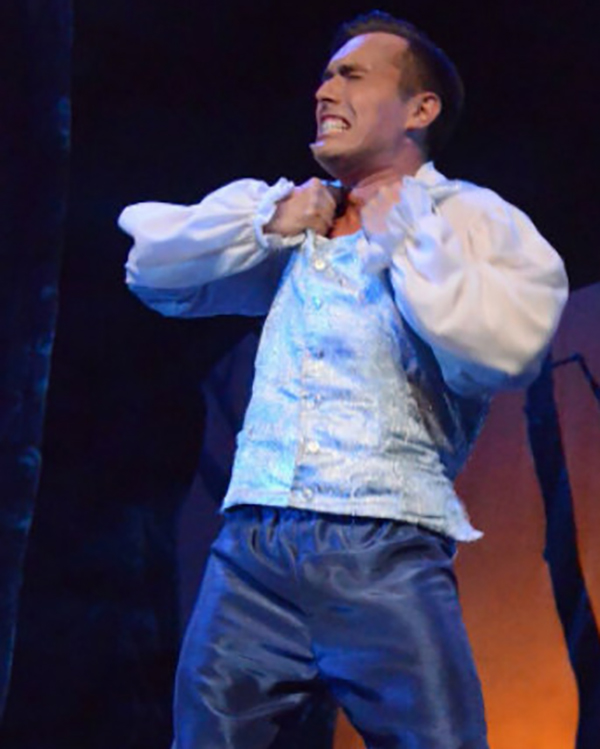 Rapunzel's Prince in Into the woods 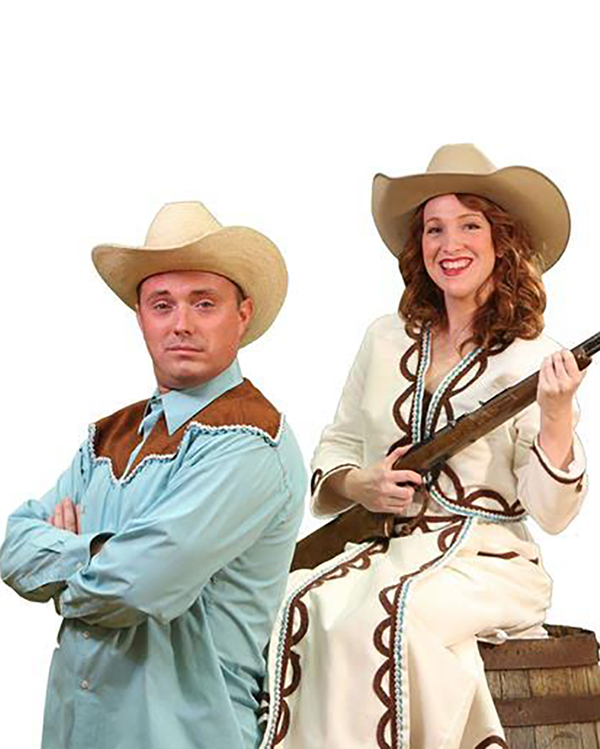 Frank Butler in Annie Get Your Gun 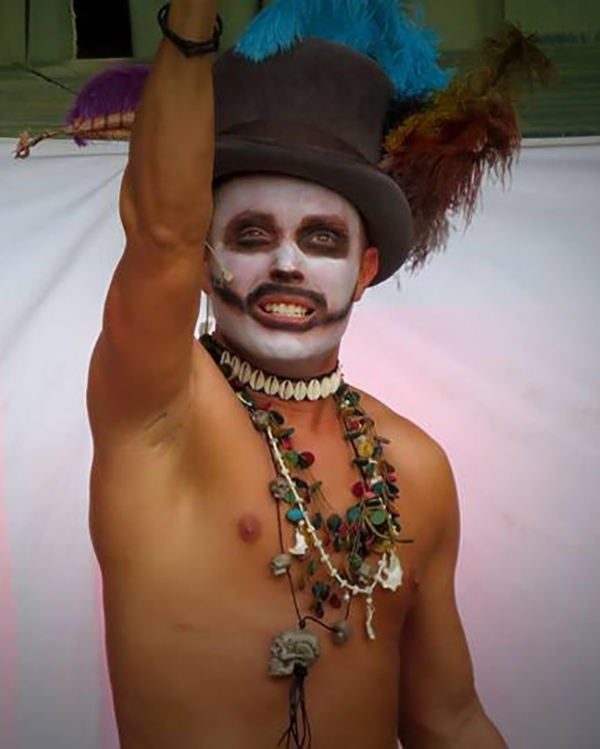 Papa Ge in Once on the Island 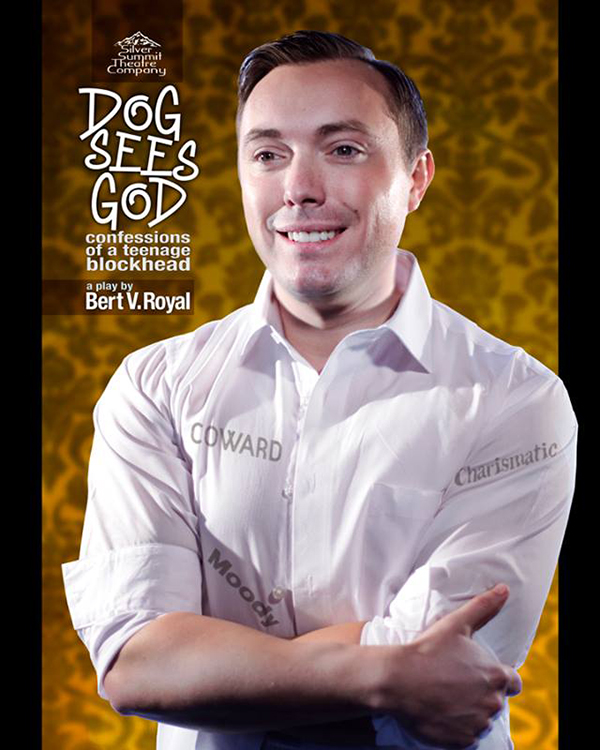 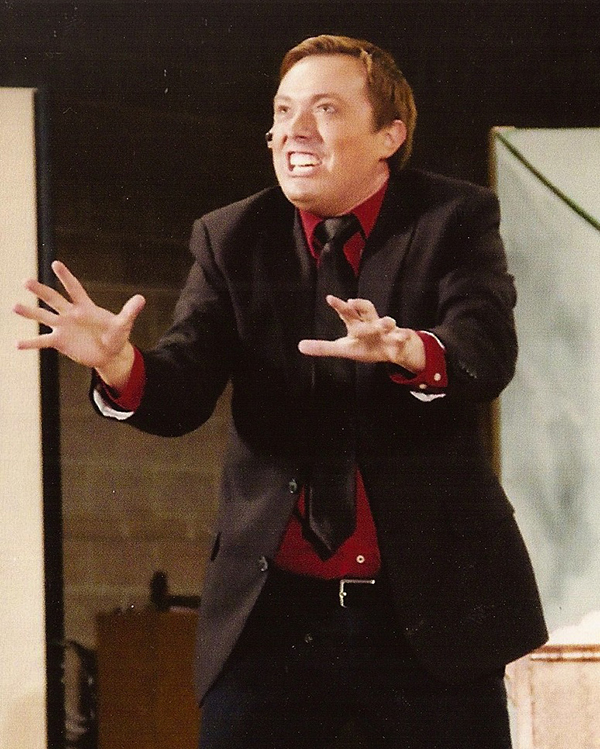 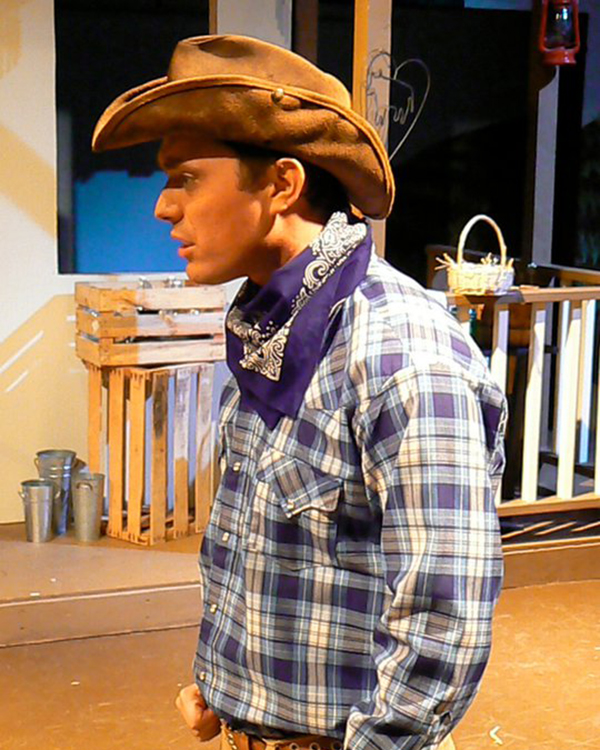 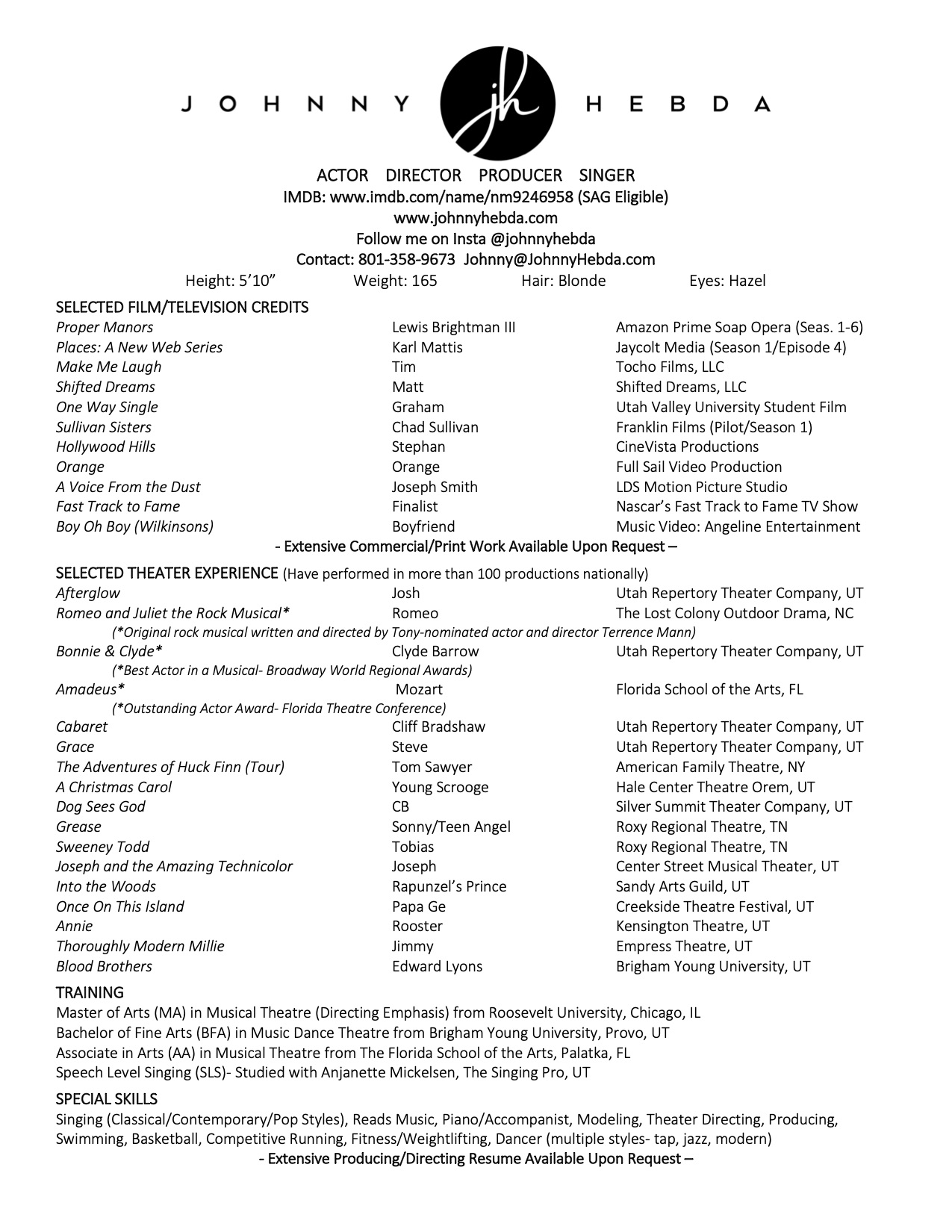 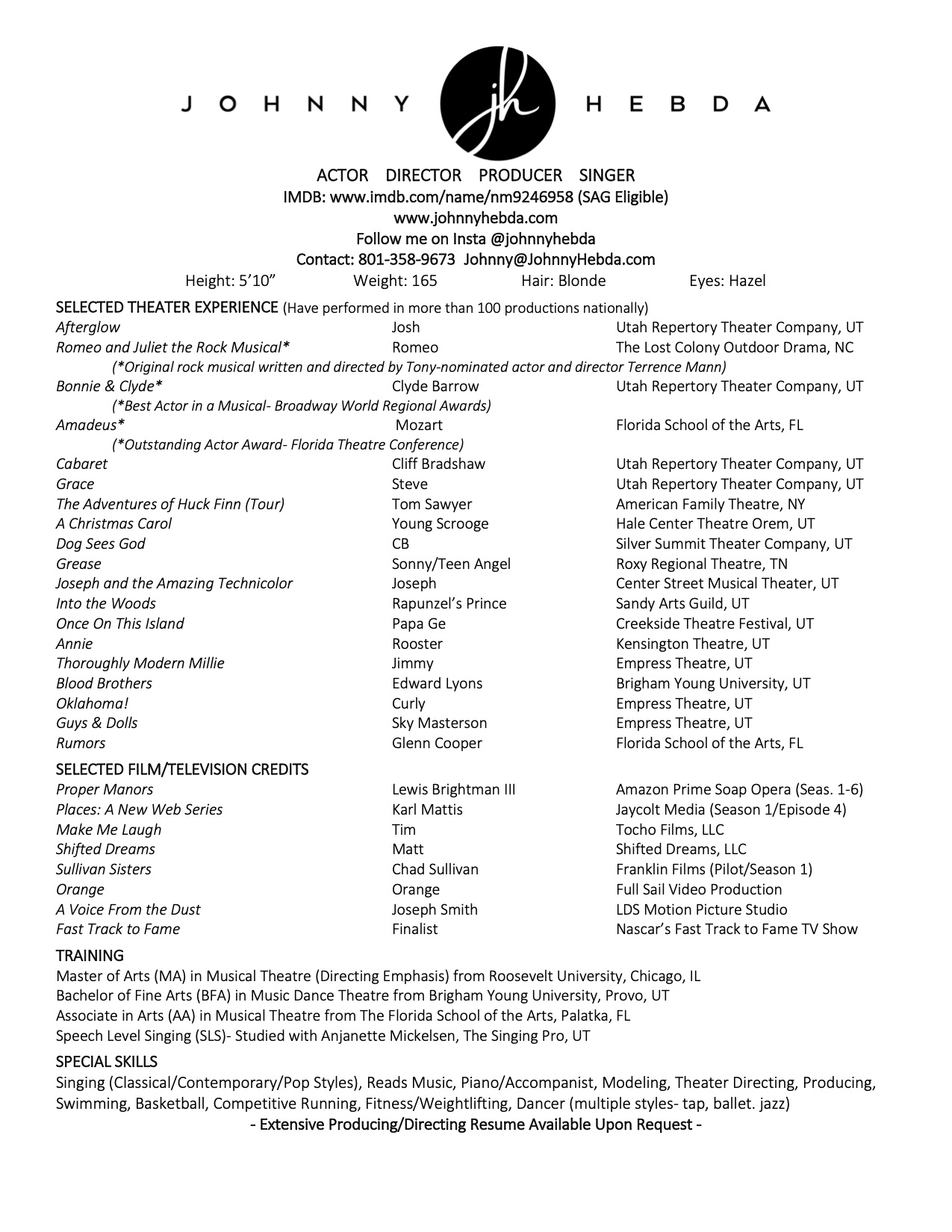 “Continuing its mission to bring productions to Utah other companies won’t touch, Utah Rep boldly staged the steamy off-Broadway hit Afterglow. And what other theater is able to bring acclaimed opening-night guests (S. Asher Gelman, Afterglow playwright/original director; along with the authors of Straight, Scott Elmegreen and Drew Fornarola)? Johnny Hebda was heartbreakingly effective in the lead role of Josh.”

"GRACE perfectly demonstrates everything that is wrong with Christianity in the character of Steve, performed with crazy-eyed furiosity by Johnny Hebda."

"Johnny Hebda played Steve as the formulaic evangelical Christian who sees faith as a panacea to the gambit of problems from the spiritual to the financial. Hebda played the role with fervency. His strongest scenes were those where Steve's hypocrisy became comic."

"Exquisite! The actors presented their characters excellently with great depth…"

"Johnny Hebda as Cliff brought sensitivity, naïveté, fearlessness and courage to the role."

"Cabaret is the best nonprofessional musical theater piece I have seen. A benchmark production. The entire cast, led by Teresa Sanderson, Anne Louise Brings and Johnny Hebda, is also outstanding. Way to raise the bar on what can be achieved locally."

"Hebda and Brings were more than capable of handling the vocal requirements of the roles and their voices blend well to each other's in "Perfectly Marvelous".

"Clyde Barrow played by Johnny Hebda was an acting stand-out. From the moment Hebda took the stage he was completely in his role. Hebda did a great job portraying Clyde as a man who is exacting cold-blooded revenge on the world but at the same time is still capable of real feelings such as killing for the first time and his love for Bonnie. I very much enjoyed the dynamic between Hebda and Weinberger, they both made a very believable Bonnie & Clyde and couple."

"Johnny Hebda played Clyde with a human dimension—especially in prison—that is often missing from the legend. When Johnny Wilson and Johnny Hebda sang "When I Drive," I saw a depth of character in both Buck and Clyde, which were enriched by the excellent harmonies."

"Clyde, played by Johnny Hebda goes from an adventurous and mischievous kid to a tortured and desperate man in the span of two hours. His anguish and desire for more—more life, more love, more fun– can be keenly felt from the back row of the theater."

"Johnny Hebda as Clyde is a talented man with a wide range in acting and a lovely voice."

"I've seen the show [Bonnie & Clyde] and am thrilled to be able to see it again. It's breath taking. Johnny Hebda is brilliant as Clyde and a major talent."

"Johnny Hebda as Clyde and Madeline Weinberger as Bonnie should both be very proud of [their] performances! It was thrilling to watch the magic on stage that night! Although it's only January I'm certain it will be a stand out performance for the year!"

"The vocals of the very appealing Hebda, a veteran of larger stages, are powerful and full of expression. His Joseph commands the stage."

"Joseph, played by Johnny Hebda, was perhaps the strongest part of the performance. In the number "Close Every Door," Hebda's stirring voice coupled with the interesting lighting design made that one of the best parts of the evening."

"The Empress string of very strong male leads continues with Joseph. Johnny Hebda brings six-pack abs and a strong background to the role. His performance was outstanding and he is very much at ease in the role."

"The entire cast was amazing, but the standout performance of the night came from Johnny Hebda as Joseph."

"Johnny Hebda played a wonderful Jimmy with a strong, powerful voice. My favorite scene of the show came from the fun playfulness and sweetness that he exhibited with the song "I Turned the Corner."

"Johnny Hebda, captivated as the leading man, Jimmy Smith, but in a quirky, obscure kind of way - a la Dick Van Dyke. His boy-like innocence, almost obliviousness, was refreshing in the show."

"Johnny Hebda and Russ Maxfield as the Princes were the highlight of the production. Their brotherly rivalry, especially as they lamented to one another during ‘Agony', was hilarious. Each with powerful voices that blended nicely, coupled with charming good looks, brought audible reactions and whistles from the audience each time they were onstage with their strong stage presence."

"With much assurance and pizzazz, Johnny Hebda hits the bull's-eye as Frank Butler. He has a robust singing voice and a genial authority on stage. Annie and Frank form one of musical theater's most spirited couples, and Hebda develops chemistry with Wilson, who is a reliable trouper. In "Defenses Are Down," Berlin has written a charming song about Frank recognizing the lost confidence he has regarding women while still falling in love with Annie, and Hebda nails the wavering swagger."

"There was a certain standoffish confidence to Frank Butler's smile. Johnny Hebda does this with ease. He was easily confident on the stage and provided much of the power to his songs and group numbers."

"Hebda, as Papa Ge, excelled at the evil role, and his evil laugh made me wonder if he was having a little too much fun with this role."

"A wonderful play, outstanding acting, and a powerful message all rolled into one terrific event. Johnny Hebda gives a stunning performance. This young lad has a stage presence extraordinaire; he lives his role and easily takes his audience along for a roller coaster ride of emotions, revelations, and contemplations. A truly gifted actor!"

"The main character, CB, is played by Johnny Hebda. His performance was emotional and raw."

"Johnny Hebda as CB, who kept the audience suspended in a teary place between comic strips and moral conscience as he debated the possibility of life after death, as well as his place in life."

"CB is played by Johnny Hebda with an engaging naturalness. Hebda's final outburst is the most authentic moment of the play. It is heartbreaking and absolutely raw"

"Johnny Hebda shines in his performance as the Devil. He's got the young, attractive, charismatic appeal that you would want from a schmoozing salesman. Hebda performs the role with panache."

"Oklahoma!" opened with this angelic voice wafting from the rafters. "Oh what a beautiful morning" indeed. Methinks to myself this voice sounds BYU Music Dance Theater program if I ever heard one. A quick glance through the program confirms my suspicions about Johnny Hebda as Curly. Not only did his voice bring a smile to my face, but his smile did also – I love when the male romantic lead of a show is aesthetically appealing.

"Curly begins by singing "Oh What a Beautiful Morning." Curly, played by Johnny Hebda, has a beautiful well-trained voice and has the appropriate roguish cowboy appearance. Vocally, Hebda and Tritchler are well-matched—both of them are marvelous singers, and they both have youthful good looks."